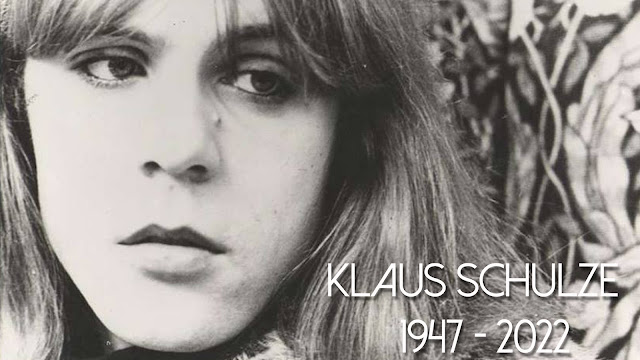 Musical hero, inspirator and artist who had the biggest impact on my music in every thinkable way, has passed away on Tuesday at the age of 74.Without any doubt Klaus Schulze and his music have been most noticeable influences for my music throughout the years. Although I have always had a fascination for the electronic music genre since I was 8 or 9 years, Klaus Schulze (whose music I actually discovered 5 or 6 years later) in my eyes has always been an exceptional phenomenon who was capable of letting electronic music sound more human and organic than any other synthesist I have ever known could have managed. Whether it was solo, under his pseudonym Richard Wahnfriend, with Ash Ra Tempel, or as collaboration with artists like Manuel Göttsching, Harold Grosskopf, Wolfgang Tiepold, Arthur Brown, Michael Shrieve, Rainer Bloss, Pete Namlook, Jörg Schaaf, Roelof Oostwoud or Lisa Gerrard, to name a few.
"Dreams" and "Miditerrenean Pads" were the first Klaus Schulze albums I got to listen to. While the latter sounded like something I had never heard before at that time, "Dreams" appeared to be an extremely close identification of how I experience my dreams and how I approach my own music. Although with a wink, the album's original working title "Klaustrophony" suggests even more how close this album must also have been to Schulze himself. The record company rejected this title because of commercial reasons, but the album's infamous closing track still retained this title. So from that very first moment I have felt a clear connection with most of Klaus' musical output.

Amongst the so many albums (more than 40 and far over 100 releases) Schulze released since the early 70s, there are a lot of instant classics including "Timewind", "Moondawn", "Mirage", "X" and "Dune". However, for me "Dreams" (specifically the original 5 tracks release on the Brain label) always topped this list. Besides what I have just mentioned, this might also be because Klaus' mid / late 80s were relatively 'less productive', and his music sounded more balanced again at this point after the chaotic early 80s output of his Poland era.

For a lot of my solo concerts, the 1997 "Dosburg Online" concert and its structure continues to be a source of inspiration. The tension and variation of this performance is absolutely brilliant from the beginning to the end.

Recent years Schulze's musical output became more of a routine and eventually therepeutical rather than it contained artistic highlights. When "Kontinuum" was released in 2007 I was absolutely overwhelmed by its content. Never expected Klaus Schulze to be this intense and emotional again. This masterpiece always felt like it could have been Schulze's final album. Which wasn't the case for the 15 years that followed.

Still, so many people associate electronic music with computers, DJ's, robots, the universe, or whatsoever. But there are so many acts involving electronics without even having any connections with any of the above. Yes, the equipment is and remains something (that can be) automated, but in the end it's the artist who should make this equipment come to life. And Klaus mastered that like no one else.

Outside the fact if you like his music or not, most of Klaus' logical sounding chord progressions and naturally evolving transitions made largest part of his music sound familiar and approachable.
The combination of detailed, stretched out and layered storylines, progressing themes, and speaking leads let his compositions come to life and breath even more. And there are still not many artists who managed to do the thing what Klaus did during his 50 years career.

In the late 60s Klaus Schulze was groundbreaking, experimenting together with artists and bands like Hans-Joachim Roedelius, Tangerine Dream, Amon Düül and Neu!, as part of the Zodiac Free Arts Lab.
What they did was different and opposite from the mainstream. After this short-lived movement, Klaus continued to pioneer and focused on his own musical journey. First with the drums, adding a Farfisa organ and VCS3, even orchestra, and involving more electronica with the years, followed by his famouns wall of synths, always the eye-cather during his live shows.

I was lucky to attend concerts in Cologne (Kickzone, 1999), Osnabrück (KlangArt Festival, 2001), Loreley (Night of the Prog, 2008) and Amsterdam (Melkweg, 2009).
And I already bought a ticket for what was announced as his last concert ever, planned for 2016 in Poland. Due to Klaus' health issues, this concert was cancelled.
Klaus Schulze's appearance on stage always was charismatic and magical. Already before striking the first note, he got the audience's sympathy with his kind and humoristic personality.
Although he had always been surrounded with a lot of keys and knobs during his concerts, it always was the man behind these keys and knobs who let the magic happen.


After the Osnabrück concert in 2001, I got to speak to my musical hero. At that time I just released my first official cd, "The Art of Imagination", which I presented to Klaus.
Despite the fact that Klaus Schulze has always been a solitary musician, who mainly focussed on his own music, he kindly accepted my album.
We had a small talk about my music, and Klaus had to smile when I told him that people mentioned me as his follower-up. Which, indeed, was way too much credit after having just released two albums back then.

A lot of wonderful memories. The train trip to Cologne. Smuggling recording equipment into the concert site of Kickzone. Getting Klaus' first autograph after the performance. Trying to get a fully booked train earlier after the concert because all nearby hotels were also fully booked and we haven't had any sleep for more than 24 hours. The bus trip to Osnabrück. Getting recognised abroad as artists for the first time, at the KlangArt Festival. Smuggling recording equipment into the venue, and finding out that there was no security check at all. The excitement when Klaus started the sequence during the second part of the show in Osnabrück. Klaus sitting on the stage to chat and sign after the concert when there were left only a handful of fans at the venue.

One of my most memorable concert experiences without doubt was when Klaus Schulze and Dead Can Dance's Lisa Gerrard joined forces, and performed at the Freilichtbühne Loreley, St. Goarshausen, as part of the second Night of the Prog Festival in 2009. It was magical and moving, and at some points highly emotional. Part of these emotions are now coming back again.

Klaus, thank you for being part of my life. Without your music my musical world would definitely have been something completely different.

Sadly Klaus Schulze didn't make it to the release of his new album "Deus Arrakis", which will be released posthumously on June 11th.