Two and a half years after my debut at the Awakenings Festival, I was being asked to perform here again. This time as part of the All-Dayer. Which is the final edition of the season.
On the four evenings of this festival earlier this year, three acts entered the stage. The All-Dayer (as you might expect) is spread over the whole day. Offering three acts in the afternoon, and three in the evening.
In 2012 I performed solo, and because I am involved into Free Arts Lab at this moment, I decided to perform with Jeroen Hagen and Petter Janse at this edition, when I was being invited.

Friday, October 10th early in the morning we loaded our van with all equipment and headed to Calais to take the ferry to Dover. Before midnight we arrived at our hotel in Derby, and before going to sleep we had a drink at a local bar in the centre of Derby.
Saturday, October 11th, right after breakfast, we drove to Paget High School in Burton upon Trent where we unloaded our van and enjoyed the concerts throughout the day, which started around 13:00.
Six concerts varying in length in between 40 and 70 minutes, with intervals of 15 minutes in between each of them. 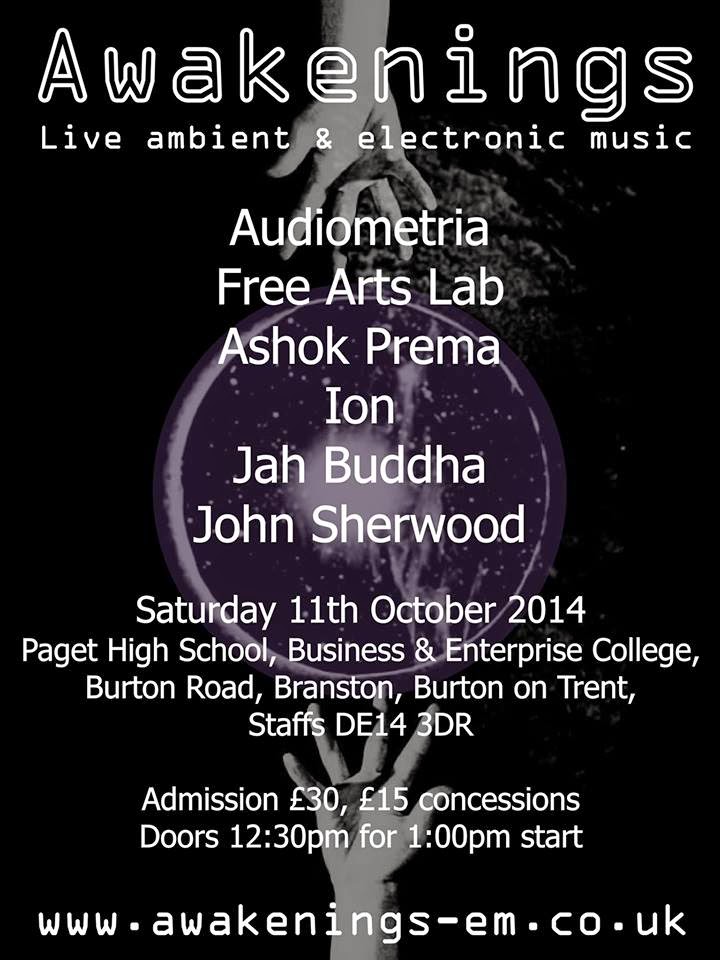 John Sherwood opened this third edition of the Awakenings All-Dayer with his musical creations which could be categorized somewhere in between ambient and minimal. A nice ambient start, and later on sequencers. Unfortunately it lacked any progress within the tracks and musically and performance-wise it couldn't catch me.

The set by Jah Buddha (aka Bob Hedger) mainly consisted of strong and driven Berlin School sequencing, and from time to time typical solos. Excellent layering of sequences, great and well chosen sounds and very interesting progress during his set. Absolutely recommended and highly enjoyable for the ears.

Ion, a three-piece formation, headlined the afternoon session. Starting their set with soothing ambient, blended with elements of dreamy new age. After this, an uptempo track, more ambience and then another energetic and exotic eastern-influenced track featuring a belly dancer. Continued by a cheezy English folk song  featuring (out of tune) flute and violin. The following uptempo tracks luckily did forget its precedor.
Although the band's presentation was chaotic, they delivered a nice set. Accompanied with from time to time nice visuals.

Then a long break followed in which we setup our equipment and did our soundcheck.

Ashok Prema continued the programme at 19:00. Because we had to change clothes I missed a large part of it. The part I heard contained nice music, with a lot of Hindi influences. The trio played their tracks without intermissions in between, so it was a nice constant listen. Very melodic, clear themes and well chosen and characteristic sounds. Only the two younger keyboard players could have played slightly more accurate and convincing.

20:00 it was time for us.
Our second Free Arts Lab performance in this formation, and although we did a satisfying try-out last week, we were very excited to learn how our music was going to be received by the audience. As well sound- as performance-wise.
We were a bit overwhelmed by all positive vibes and reactions of the audience. Still I have some points of attention for our performance and setup, but I think the audience didn't notice most of that. We left the stage very satisfied.

Directly after our show, I was honoured to get officially accepted as part of the Awakenings-family, and was very surprised to receive a delicious birthday-cake. Complete with lighted candles. Thanks a lot!

Then it was time for Audiometria, who came over all the way from Tenerife to debut at Awakenings.
A couple of months ago Radio Massacre International should have headlined the festival, but due to health reasons of bandmember Gary, the Canary Island duo was invited in place.
Miguel and Javi performed a typical traditional electronic music set. With a lot of power sequencing.
Intermissed with some ambient pieces layered with virtuoso piano solos. It is always a pleasure to notice that there are schooled musicians around who are capable of doing just that little bit more. Really nice!
And then again... Deep and powerful sequencing which definitely should appeal everyone who is into electronic music. Excellent headliner!

My second Awakenings experience was again a very positive one. Musically seen there was offered a varied programme. The number of visitors was ok (somewhere in between 30 and 40), but could have been slightly higher. In any case it again was an absolute pleasure to perform at this event and venue.

The day after, we headed back home.

Rest to thank the organisation and crew (Phil Booth, Jez Creek and Dave Buxton), volunteer girls from the catering and all people who were present this day and/or supported by buying a virtual ticket. 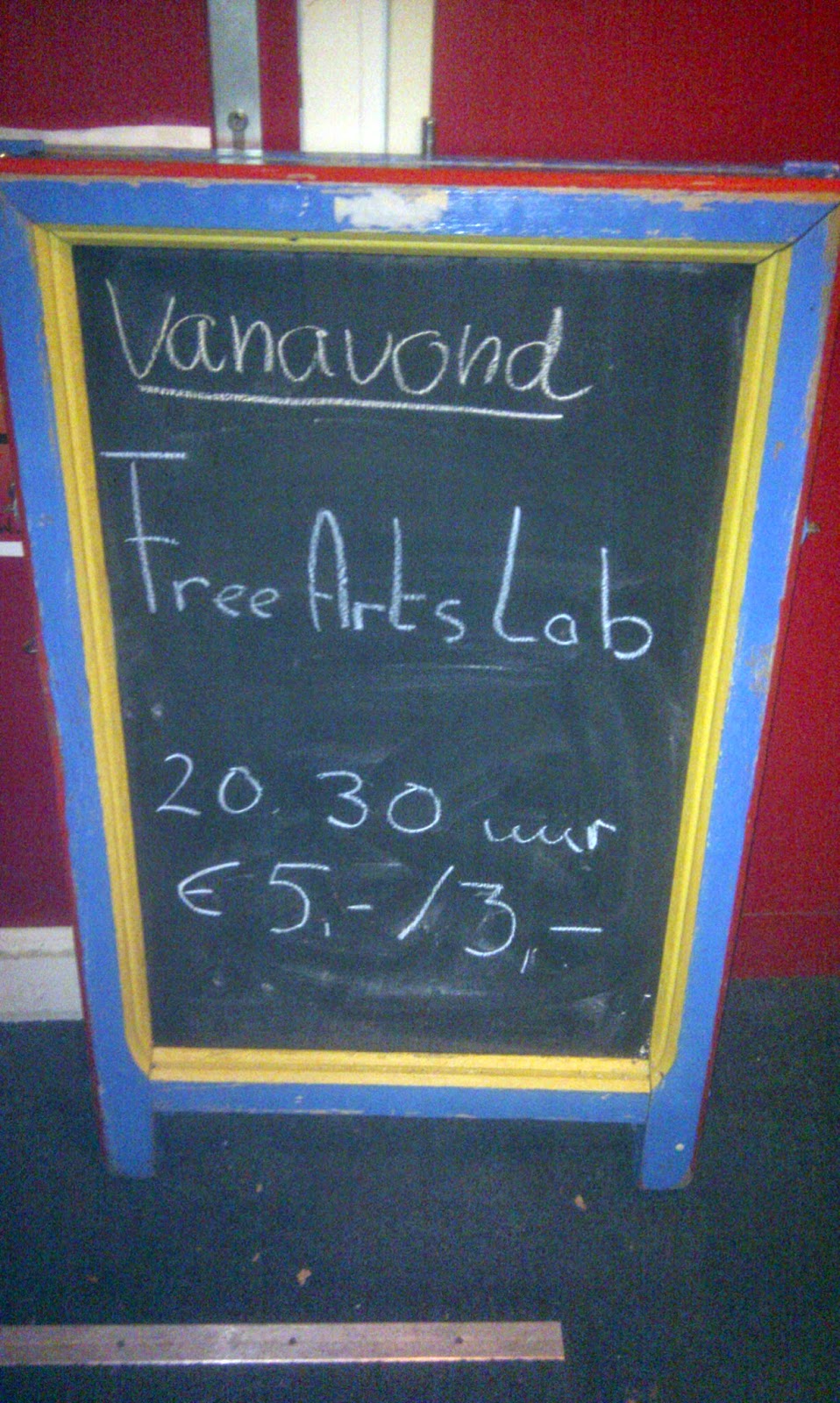 Friday, October 3rd, Jeroen Hagen, Petter Janse and I did a try-out at the Pletterij in Haarlem for Free Arts Lab's upcoming appearance at this year's final edition of the Awakenings concert series, taking place in Burton-on-Trent (U.K.). This specific edition is called the 'All-Dayer' and features 6 electronic music acts throughout the whole day, instead of 3 evening concerts during the previous editions of 2014.

Early in the afternoon we set up our equipment, did a soundcheck, and we had the time to already play the entire set. It was the first time we rehearsed our show accompanied with the final visuals, which were created exclusively for our show, by Sietse Bruggeling. And it was the first gig in our current line-up.

In the first case this try-out was meant to test and fine-tune our current (relativeley complex) setup. It worked quite well, also thanks to the professional assistance and advise of sound engineer Rob Brakel.
In the end there were made some slight adjustments to our setup. 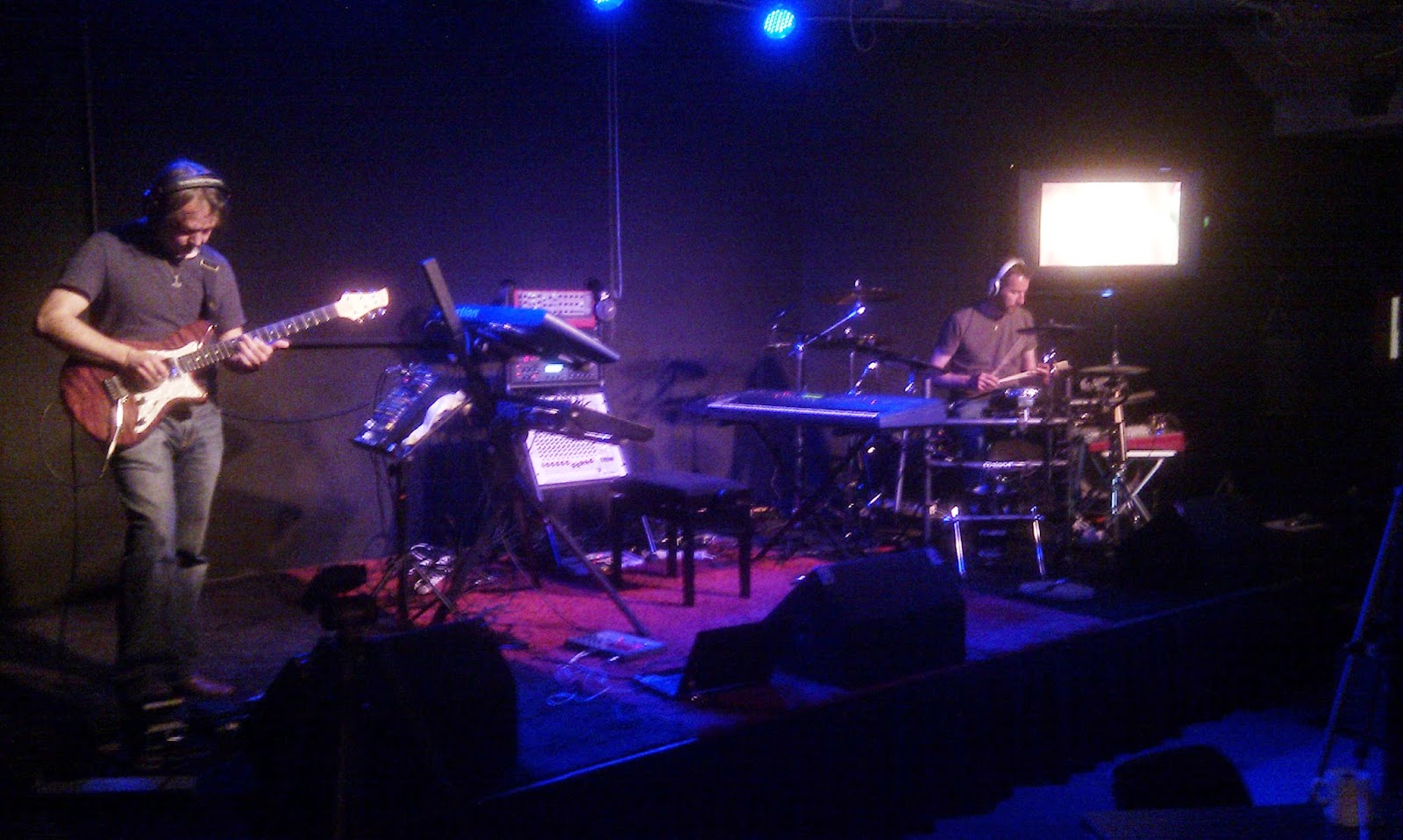 We decided to create a setup which should make it as comfortable as possible for any PA and sound engineer at any thinkable venue we are performing our music.
Each of the musicians has his own mixer, from which the output is going directly to the PA. Normally any onstage monitoring is being sent from the PA. But we chose to do our own monitoring, via routing through our own mixers.
We prepared everything in such a way that it practically doesn't need any adjustments during our show. So only configuring the PA of the venue for the main mix is an issue.


When starting our afternoon sessions, I noticed that my Korg M1's pitch bend joystick was broken.
Quite frustrating, because I really use to use it a lot. In the meanwhile I replaced the joystick with a working one from one of my spare M1's, so I am glad the pitch-bend and modulation control it available again in time for next weekend's Awakenings All-Dayer.

After our afternoon session, all sound settings seemed to be satisfying, so we had a very relaxing break while dinner was being served.
Around 20:00 the first people entered the venue. In the meanwhile we changed costumes, and 'prepared' for the evening part. In the end around 30 people attended our try-out. Not bad, because I had no expectations at all.

Slightly past 20:30 the sequencer started, and 72 minutes later we played our last note.
Except for some wrong notes and an improvisation that could have been slightly 'better' (hey, that's live), we left the stage very satisfied.
And we were glad to hear that most of the visitors enjoyed our music and experienced a nice evening too. 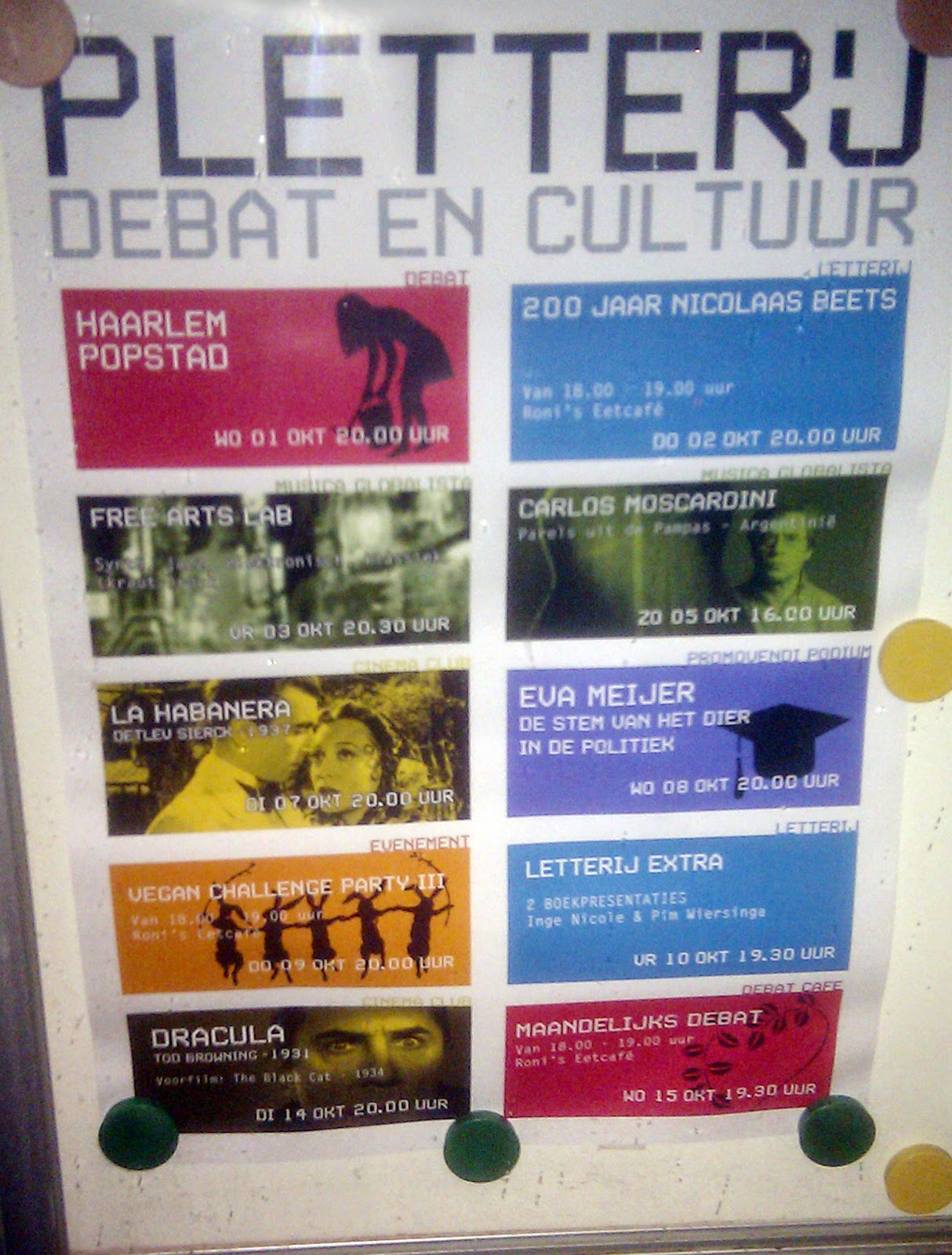 Special thanks go out to Arno Duivestein (who offered us the opportunity for this try-out at this really nice and comfortable venue. Which was arranged on a very short term (only two weeks in advance). And Rob Brakel (sound engineer and video registration) from the Pletterij.
Both gentlemen were present, helpful and supportive the whole afternoon and evening.


Also many thank to Lionel Calvetti (assistant sound engineer), Angela Boogaard (video registration) and Roni Klinkhamer (cook). The Pletterij crew really made us feel at home.
Thank to Dennis van der Made for arranging the beamer, Jeroen Hagen and Petter Janse for getting involved into this musical journey, Paulien Bouw for her infinite support, and last but not least: big thank you's to all of you who attended our try-out and wished us luck for our upcoming concert in the U.K.
Gepost door Remy Stroomer op 21:40 Geen opmerkingen: 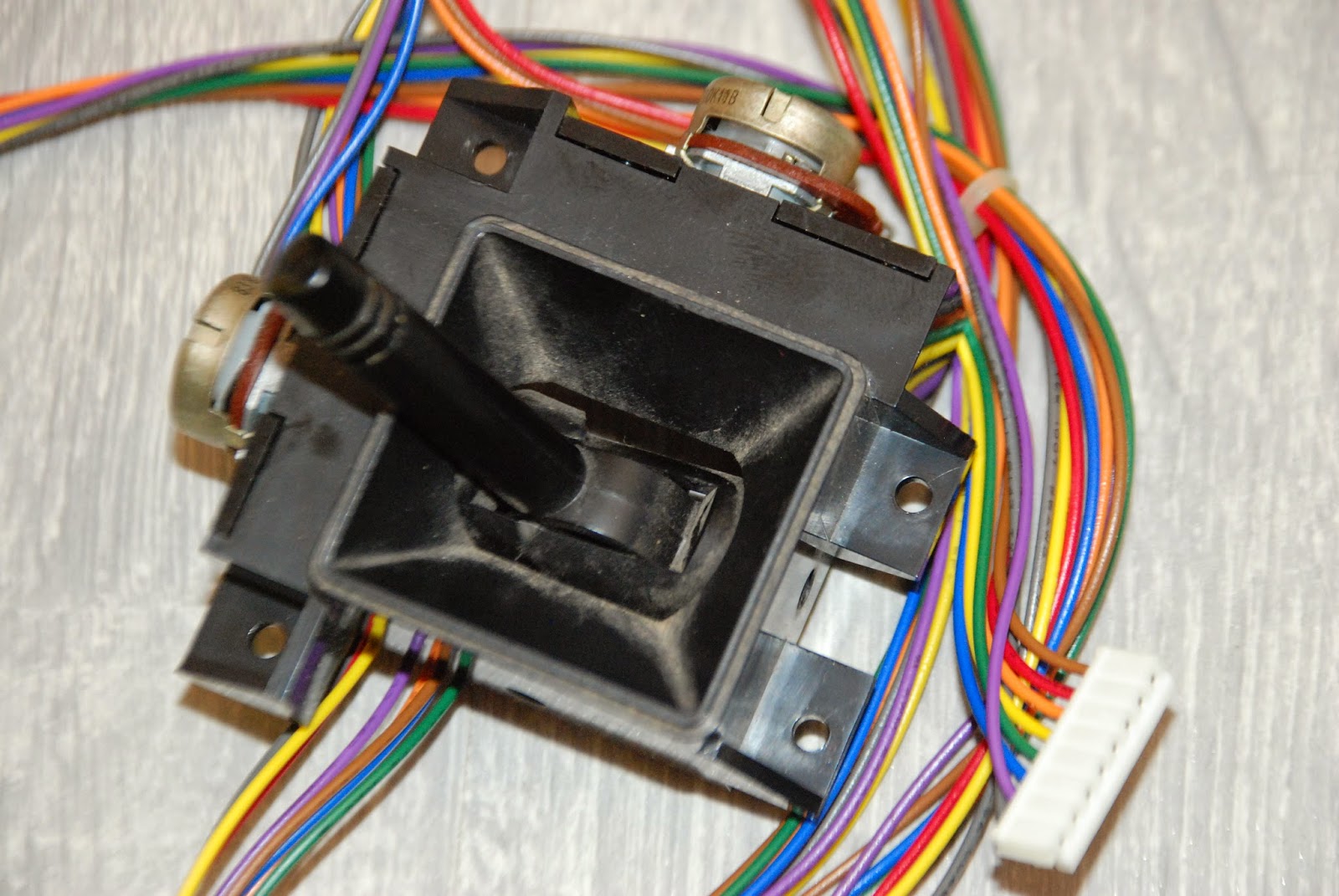 Just before last Friday's Free Arts Lab concert at the Pletterij, the pitch bend / modulation joystick of my Korg M1 broke.
Very frustrating because I use to use it a lot, especially during my solos.
And because of the fact that it was the first synthesizer I owned, and still use it during most of my concerts (and have used it on all my albums so far), I actually can't without it.

Yesterday I opened the synthesizer to replace the broken stick with a functional one from a another M1, which I have for spare parts.
In the end this wasn't the hardest job, except for the fact that there first had to be removed the upper two print boards to get access to the cables leading to the connection with the rear of one of these boards.

Glad to have my brave old Korg M1 in good shape again. And in time for our Awakenings gig, next weekend.
Gepost door Remy Stroomer op 10:20 Geen opmerkingen: