As you could have read on my previous blog, this year it is exactly 20 years ago that my debut album "Exhibition of Dreams" saw the light.
To work towards this celebration, I will share related facts, stories and more, within the next weeks.

Today, it is exactly one month until the release of "Exhibition of Dreams 20th anniversary".
"Exhibition of Dreams" is a collection of the best tracks I had to offer at that time. They were composed and recorded between 1997 and 1999. For the release of an album, there had to be recorded better versions. Which was done after having moved all equipment to the attic of the home of the parents of my musical partner in crime, Ewout Koek.
Where we had in mind to release a single disc, it became clear during the recordings that it simply had to be a double CDR. Quite daring for a debut album, but it felt good. And we didn't have to take big commercial risks, or obligations to a label to restrict to just one disc. Besides, we just established our own label, AKH Records.
As I didn't have a clue if my music could be interesting to other people, "Exhibition of Dreams" became a testcase to find this out. And, surprisingly it became clear that it moved people. My debut paved the road for my musical journey since then.
When I got in contact with the dutch Groove Unlimited label, there was discussed to release a selection of "Exhibition of Dreams" tracks as a single CD. The album was not meant to fit on a single disc, so I came up with an entirely new album, "The Art of Imagination". It was released the year after my debut.
Gepost door Remy Stroomer op 21:00 Geen opmerkingen:

As you could have read on my previous blog, this year it is exactly 20 years ago that my debut album "Exhibition of Dreams" saw the light.
To work towards this celebration, I will share related facts, stories and more, within the next weeks.
Earlier this year, when browsing through my archives, I selected some significant recordings. The limited edition "Exhibition of Dreams in progress" disc contains these never released before essential audio tracks which lead to the final selection of tracks for the album that was released on December 20th, 1999. Strictly limited to 100 copies, and available as part of two limited "Exhibition of Dreams 20th anniversary" box-sets:

Secondly there are included four live tracks. Three of them have been part of a concert I did on November 13th,1998. This was the first time I exposed music from the debut album in progress. A couple of months later (17, 18 and 19 February 1999), I played "Mirage" as warm-up for the talents show on my high school. The registration of the first of these performances is included on the CD.
Please visit www.desertedislandmusic.nl to order your copy!
Gepost door Remy Stroomer op 16:40 Geen opmerkingen:

Additional offer
Buy two or more CD's from the REMY catalog, and get the "Exhibition of Dreams 20th anniversary" 20 pages artbook for free.


* Please note that the artwork is not definitive yet, so it might be subject of change within coming weeks.
Gepost door Remy Stroomer op 22:33 Geen opmerkingen:

It has been a while ago since my last blog. But in the meanwhile I have spent a lot of time in my studio. And I am looking forward to share old and new stuff with you on short term.
To start with, next week there will be revealed details about the upcoming celebration of the 20th anniversary of "Exhibition of Dreams".
In first instance I had a different kind of schedule for the 20th anniversary celebration of "Exhibition of Dreams". While I simultaneously have been working on a brand new studio project, I had in mind to release both "Exhibition of Dreams - 20th anniversary" and the new studio album, near the end of 2019.
One of the releases - or more likely both them - would be overshadowed or it would have caused confusion when being released at the same time.
So I decided to reserve the end of 2019 for the celebration of my debut album, and postpone the new studio album until early 2020. 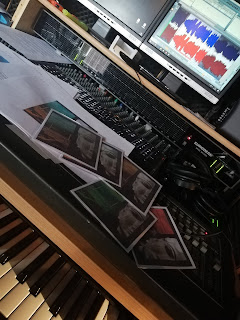 As part of the anniversary celebration of the 1999 album, I considered doing a concert tour covering my musical career so far, as well as an integral performance of the entire debut album.
I struggled with this for a few reasons. With the remake of a selection of tracks from "Exhibition of Dreams" (2009) as only exception, I have never redone finished things. Ok, as part of concerts I reworked and played some of my older tracks, but furthermore I didn't feel any need to come up with another revisited version of music pieces that have been created and recorded 20 years ago. Secondly, when doing a tour of, let's say, 10-20 gigs, performing a lot of the same pieces over and over again, I get bored. I could do it without any doubt, but it simply isn't what I want to do. So I decided not to do it this way.
Instead, I came up with a valuable addition to the "Exhibition of Dreams" franchise. But more about this in my next blog.
Then, the new studio album will be more conceptual than ever before, involving a couple of artistic collaborations. First things first, so you just have to wait patiently for the exciting things to come!
Gepost door Remy Stroomer op 18:13 Geen opmerkingen: