Planet of the Arps @ Bochum Planetarium 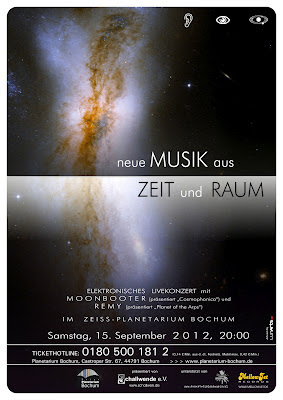 Saturday September 15th I will be premiering a completely new ambient project, called "Planet of the Arps", at the Bochum Planetarium.
The piece is a work in progress from 2010, and has been 'perfected' since then.
It consists of music which doesn't entirely fit into the REMY-tradition, so I decided to give it another name.
There was no intention to do something that hasn't been done already, but I 'just' wanted to create a piece of ambient music in the style of for example the well-known "Dark Side of the Moog" series bij Klaus Schulze and Pete Namlook.

"Planet of the Arps" refers to the sci-fi movie Planet of the Apes, Arps (galaxies) as collected by Dr. Halton C. Arp, synthesizer manufacturer Arp, and the musical term 'arpeggio'.
I decided to specifically perform this piece on this special evening at the planetarium, because I think the project fits perfectly into these universal circumstances, accompanied by visuals from space.
Also performing this evening: Moonbooter.
At the end of the evening, we will do a session together.

Besides the performance of "Planet of the Arps" there is also been worked on a cd release of it, with the cooperation of a familiar name in the EM/ambient-scene. To be continued...
Gepost door Remy Stroomer op 20:49 Geen opmerkingen:

Project with "My Breath My Music"

Friday I am going to participate in a very special and challenging project.
In cooperation with "My Breath My Music" there is initiated a session together with some of the students of this establishment.
I have prepared some music, on which we will do improvisations. Really looking forward how things will work out!

The purpose of "My Breath My Music" is to offer people with severe physical disabilities a possibility to make music with for example self-developed electronic instruments.
The main target is people with a muscle desease.
Electronic wind instruments enable disabled people to play an instrument. It also is an effective way to practice the lungs, which is very important for the targetted group. 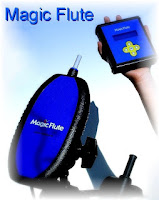 An especially developed instrument is the Magic Flute. Here is some information, taken from the manual:
The Magic Flute was originally designed as an adaptive musical instrument for people with little or no arm movement - with the goal of allowing people with a wide range of disabilities the ability to perform live electronic music that can be at the highest professional quality. It is also an exciting and rewarding way for people who have limited lung function to carry out Breathing Exercises that will never become tedious to them.
The Magic Flute is not only an instrument but also acts as the remote control for the Control Module (sip & puff).


Detailed information (in Dutch) about "My Breath My Music" and the magic flute can be found on: http://www.mybreathmymusic.com/
Gepost door Remy Stroomer op 13:37 Geen opmerkingen: