My new release "The Great Church Trilogy" has been promoted succesfully so far at the Electronic Circus and E-Live Festivals, and on November 12th I will also be present with the new release and my other music at the Grote of St.Bavokerk / Great Church of Haarlem.
Again note that I will NOT be performing that day! I've got a lot of question about this several times, but although I will be delighted if you drop by (and even more if you also buy my music;-)), I can't bring you any live music at this location until somewhere halfway 2012. To be continued...
Furthermore the promotional discs have been sent out to several radio-stations and magazines/e-zines, so expect more airplay and reviews the coming time!
And as we speak the availability of "The Great Church Trilogy" has been extended to CD-Baby and iTunes. Check complete availability at http://www.desertedislandmusic.nl/.
Gepost door Remy Stroomer op 10:53 Geen opmerkingen: 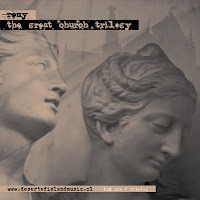 Last Saturday I presented my new album, "The Great Church Trilogy", at the E-Live Festival in Oirschot.
Time flies, having in mind I gave my last concert half a year ago at the same location, during the E-Day Festival.
The event was completely sold out and besides the familiar faces I’ve also met a lot of people for the first time!

In between the concerts I’ve had a busy time at my stall, and actually didn’t have time to see Matzumi’s concert. I’ve already witnessed her first concert ever at the Garten Party in Hamm, last year, where we also jammed together with MorPheusz.

I did see a part of René van der Wouden’s first (of three) set, which contained very nice Berliner Schule-like music, and depending on the amount of people in the hall (full house) a lot of others appreciated his music too! 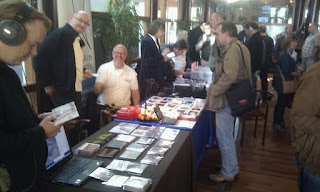 One concert I was looking forward to, was Eric van der Heijden’s. Playing a lot of his new album "Dal Segno" (which was released during this day), as well as some of his known tracks. He started solo, and was not much later accompanied by Harald van der Heijden on percussion and Frank Dorittke on guitar.
It was very clear these guys played more than once together, and besides that, they were also having a lot of fun on stage!
The very nice music combined with the nice stage lights and smoke created an excellent mystic atmosphere.
Eric’s perfectionism could be noticed during the concert; well-chosen sounds, and thought-out compositions and melodies made the concert a pleasure to witness!
While the overall-feeling and musical creations reminded me mostly of grand-master Vangelis, the encore (which actually was the only Berlin School-like track of Eric’s performance) made a very nice bridge to the next concert to come, in the end receiving a well-deserved standing ovation of the audience.

After a break of one-and-a-half hours it was time for the headliner of this year’s edition of E-Live.
Shortly before the start it was announced that the concert was going to be performed in two parts, containing an intermission. As a result of this the show ended around 0:15 AM instead of the planned 23:00 PM. People from all over the world (even from U.S.A., Russia and Japan) came over to witness the unique performance of Johannes Schmoelling, Jerome Froese and Robert Waters, aka Loom.
Ron Boots, organiser of the festival (who made an excellent decision to get these guys to Theater De Enck), simply announced this act as: "Ladies and gentlemen: ..... Loom", just to avoid any references with
Tangerine Dream or any of the artist’s solo careers. 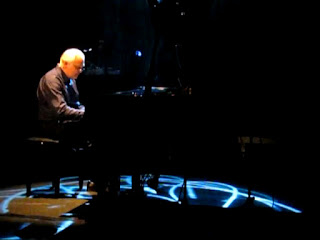 The curtains opened and Johannes Schmoelling appeared on stage - under loud applause of the audience - taking place in front of the grand piano, hitting the first notes of (the legendary) "Palace of Dreams". After this magnificent introduction, also Jerome Froese and Robert Waters took place behind their equipment, and the show blasted off with an new untitled track. Followed by Tangerine Dream's "La Marche" and "Catwalk".

After these fine tracks, Johannes told shortly about the establishment of Loom, he introduced the musicians, and he explained Jerome was a little bit compromised, because pain in his right leg.
The show would continue with more songs from Jerome, Johannes and Tangerine Dream, to continue with "Going West" from the 80's movie "Flashpoint".
The next tracks followed with a constant high quality: Schmoelling's "Matjora Is Still Alive", Froese's "A Room In The House Closed To The Public" and another two Schmoelling tracks, "A Long Way Home" and
"Abacus", continued by a collaboration of Jerome and Johannes (which appears on Jerome's third solo album), "Crystal Red". Loom left the stage for the intermission, receiving a loud applause. 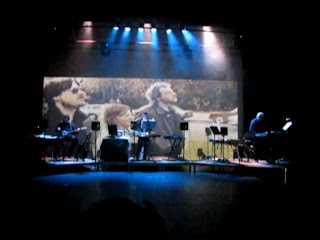 As soon as the curtains opened again after the break, Johannes re-appeared and played the grand piano for a second time with one of his own pieces, "Circles". Another excellent solo-piece which again immediately caught the attention of the very respectful and fucused audience!
"Towards The Evening Star" (which is one of my favourite TD-pieces after they went into a (let’s say it respectfully) 'different' direction, early 90’s) continued the show, with all musicians on stage again.
Hereafter Schmoelling's "Rise Of The Smooth Automation" and Froese's "My Reality At 52 Degrees Of Latitude" and "Cartoony Universe" were played. Tangerine Dream's "White Eagle" (which was accompanied with unique images of Tangerine Dream, showing a young Peter Baumann, Edgar and Jerome Froese) and "Beach Theme" continued the extremely constant show, after which the musicians left the stage, to re-appear after the loud applaus and yelling of the audience!

Then it was time for the encores!
Jerome Froese's "A Mellow Morning", followed by the title track of Johannes Schmoelling's latest album, "Time And Tide".
While a large amount of people already started to leave the hall after the last track, the three musicians re-entered the stage once more to perform the energetic Tangerine Dream track "Choronzon".
After more than two hours of music there came an end to the fabulous show! 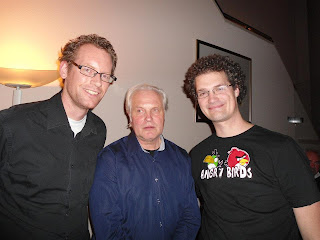 For me this performance was in first instance very special because exactly a year ago this collaboration was already being announced officially by Johannes and Jerome, at the Ricochet Gathering in Berlin, where I was also present due to my performance at this event. Secondly I think that Tangerine Dream had one of their best and most innovating eras together with and thanks to Johannes Schmoelling.

Although the concert didn't contain tracks which were better than others, it maintained a constant high quality during the complete show. No exceptions!
Where Johannes Schmoelling seemed to be the most significant member, the tasks within the band seemed to be very clear: Robert Waters managing the sequencing and background parts, Jerome Froese playing all guitar parts, including solos, and Johannes Schmoelling playing all melodies and solos, making a lot of use of his Roland Jupiter 8. Although all music was prepared and thought out, each track remained spontaneously and refreshing.

Conclusion: Loom’s concert was a very unique experience, and in my opinion it was the most special concert I’ve ever witnessed during my presence at the past E-Live and E-Day Festivals.
The variation of old and completely new tracks (which actually couldn’t be exceeded by means of sound quality - which was exactly the way they wanted to have it sound like, according to Robert Waters) and material from the individual artists, as well as Tangerine Dream classics, worked out excellent.
The high-level performance, exposing the skills and professionality of the three musicians, in combination with their experience and significance in the music scene, and the chemistry that they had together, made it all complete.
Keeping in mind that this kind of musical experience doesn’t happen very much (read: something really very special happened - which I actually can't describe, but can only be confirmed by those who were there), I am really wondering how many of the present people have really noticed how significant this concert was for the current electronic music scene!
Gepost door Remy Stroomer op 22:41 2 opmerkingen:

Last Saturday my new album "The Great Church Trilogy" was released at the Electronic Circus Festival in Gütersloh, Germany. The release is a selection of tracks recorded live during my past performances at the Grote of St.Bavokerk / Great Church of Haarlem.

I've experienced a very nice time at the Electronic Circus Festival, where I saw nice performances and met friendly and inspiring people.
The next event where I am presenting my new album will be (the sold out) E-Live on October 15th. Hope to see you there!
Gepost door Remy Stroomer op 21:40 Geen opmerkingen: