Last weekend I did a studio recording session at the Concrete Karma studio, together with the two violin players Wouter de Ruyter and Dick Bijlsma, cello player Martine de Ket (who all performed during my performance of "Return of Planet X", May 19th, 2012), and sound-engineers Renato Cannavacciuolo and Armand Giesbergen. 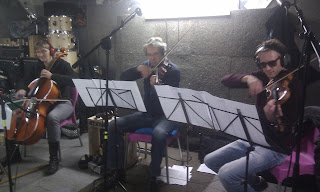 As you might already know, I am working on a release of my part of the Great Church project Ron Boots and I organised half a year ago in the Grote of St.Bavokerk in Haarlem.
Although I am very satisfied with the live recordings that were made, there was definitely need to do last weekend's studio session, mainly because of the metronome-issue we had (which disturbed the string recordings for a large part).
Besides this, I felt it was possible to get more out of this project and the collaborating musicians. The recordings went very smooth, so at this moment I am working on a proper mix of the entire piece, combining the recent studio recordings with the live recordings. With the intention to maintain the atmosphere as it was, as much as possible.

There is still a lot of work to do concerning the audio mixing. But there is also still so much work to do to accomplish the video editing part.
So my current planning to have a release before the end of the year, actually seems to be an impossible task.

In the meanwhile there also is a lot of more work to do on the collaboration with Synth.nl, but it's very likely that our "Primitives" release will see the light first (and even still in 2012!). However, I will keep you posted about all progress!
Gepost door Remy Stroomer op 17:53 Geen opmerkingen: