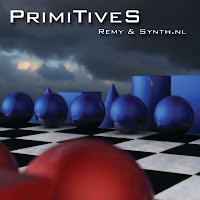 Besides the 'casual' airplay and announcements, an extensive 2-hours "PrimiTiveS" special (including interview with Michel) was aired during April 7th edition of 'Sunday Synth' by Bruce Gall. And here are links to the first reviews:
- A Ultima Fronteira Radio (Roberto Vales)
- Sonic Immersion (Bert Strolenberg)
- Synth & Sequences (Sylvain Lupari)

Within the coming days the Ambient Visions website should also feature an extensive interview with Michel and me. And I hope to announce more reviews and media appearances very soon.

E-Day 2013
A couple of weeks ago it was very uncertain if the festival was going to take place (due to dissapointing ticket sales), but in the end about 200 people found their way to Theatre De Enck. Even more visitors than last year's edition.
Besides chatting a lot and promoting and selling my music, I've also attended some of the concerts. Strangely enough I am not always in the mood for electronic music at these kind of festivals, but this time I more or less was.﻿
﻿﻿
﻿﻿ One gig I was really looking forward to was the one by the 14-years young Synthex (aka Jeffrey Haster). He was accompanied on stage by Gert Emmens on drums and keys. According to his first appearance (which was the one I saw), I think the young boy from Eindhoven did an excellent job.
He was very conscious about every thing he did, and together with experienced colleague Gert Emmens, things worked out very smooth and natural. A pleasure to listen to.

I unfortunately missed the concert by Bernhard Woesteinrich, but did catch most of the TMA & Alien Nature gig. The kind of electronic music I really like. And very attractive to whitness due to a dynamic line-up: Torsten 'TMA' Abel and Alien Nature on synths, Martinson on guitar and Thomas Betzler on drums and percussion. Their show consisted of strong and intriguing themes. Great stuff!
﻿
﻿ Another concert where I was looking forward to very much, was the one by René Splinter.
The day in advance René phoned me somewhere in the evening, a little bit in panic, because his transport cancelled at the very last moment. Although completely not on the route, Paulien and I picked up a lot of his gear. Luckily René's concert could go on, and it definitely was the highlight of this year's edition of the festival. His 'old' as well as new material matched perfectly and his skilled keyboard-playing made the whole concert a pleasure to listen to from the beginning until the end. The excited audience also got two encores, to conclude with an excellent performance of "Palace of Dreams". René's variation of the famous Tangerine Dream piece - which was also performed on this same stage by its composer Johannes Schmoelling (as part of the legendary Loom concert) on grand piano, during E-Live 2011 - was at least as exciting as Johannes' version. Excellent!
For me this was the musical end of this - again - very nice day. Code Indigo headlined E-Day 2013, but at this point I've had heard enough music for the day.
Neil Fellowes gave me Code Indigo's new cd-release afterwards, so I am going to listen to this formation's new album very soon!
Instead of the concert I have had a very nice chat with Ruud Heij. Hereafter Paulien and I left direction Rotterdam, to drop René Splinter's equipment.﻿﻿
﻿
And more...
Last Thursday I performed at an intimate "reunion" evening at my former high-school.
Kicking off the event with one of my solo electronic music pieces, and concluding the "classical, jazz and vocal" concerts (as it was announced) with a performance of an occasional formation (consisting of a singer, saxophone player, bass player, drummer, and me on keys) I've been part of in the end-90's.
We've actually only made music during festivities related to the school, but after our recent rehearsing studio sessions, we decided that it would be fun to eventually play together more often and write new material. Really looking forward to this very much! Besides this and an upcoming studio session with another band, I am working out plans for some exciting upcoming "solo" projects for the end of this year / early 2014.
﻿
﻿ With about two months there will be released a musical session I did with physically disabled children from the establishment 'My Breath My Music'. End 2012 I've already wrote a blog item about this special and spontaneous session, but now it will also come to a cd publication.
De basis consists of some of my tracks on which the students improvise with the special developped Magic Flute wind controller.
The students were totally unfamiliar with my kind of music, and we had never played together before, but all of the four skilled children contributed to the very unique output, of which we find it of significant value to have a release of. Proceeds of the album sales will go to the establishment 'My Breath My Music'. More information on this upcoming release follows soon!
Gepost door Remy Stroomer op 10:22 Geen opmerkingen: