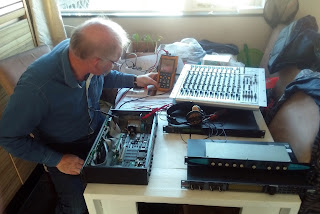 Yesterday, my father-in-law helped me out with soms equipment repairs. Because I am not really a technician myself.
There were a number of synthesizers with some minor issues.
From a couple of instruments he managed to solve the problems, but for example my Quasimidi Quasar still has some serious problems (a lot of noise through all outputs, as well as a yet undefined power supply issue), which definitely need some further inspection.
And there are still some other devices which should be revised, but for now most important equipment (including the part for my current live setup) is functioning again. So, back to work!
Gepost door Remy Stroomer op 23:45 2 opmerkingen:

Recent weeks I have been mixing for the upcoming Free Arts Lab EP, as well as my 2012 project "The Return of Planet X". Both should be released within the coming months, so detailed information on these releases is going to follow soon.

And in the meanwhile, I even found time and inspiration to record a nice amount of new music, which is very likely to become my next solo studio album.
Although there still need to be made minor adjustments to the tracks, most of it might already be considered as finished.

With the new REMY-album in the making, I am attempting a slightly different strategic approach.
As part of this, Concertzender's X-Rated* radio host Bob Rusche visited my studio yesterday, for an exclusive pre-listening session of the upcoming album.
And yes, indeed this was combined with delicious food and drinks, pleasant conversations, and more of these things. 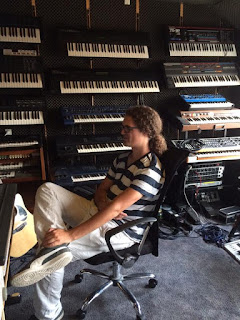 While my most recent studio release "i-Dentity" (and after this there were also released a live registration ("The Great Church Trilogy"), as well as two collaborational projects (with Synth.nl and My Breath My Music) and the first episode of my archives recordings ("Archives 1")) already dates from 2011, I didn't have any urge to release another new album. Simply because I felt that the music I recorded since then, didn't add anything new (or at least insufficient) to my current catalog. In the years in between I did write and record a lot of new music for various occasions, and although I think there is absolutely nothing wrong with these established tracks, I didn't have the feeling that any of these tracks would lead to the base for a new long player, in a way I had in mind.
But then, with the recently recorded new material, this situation changed. Actually without being planned so.

The new REMY-album is likely to contain 7 tracks with a total duration in between 70 and 80 minutes, with a rather minimalistic and slightly sober approach.
A total of 7 tracks, which might sound quite different from each other, but are clearly connected.
Having in mind to have a physical release early 2016, I already hope to reveal some audio within the coming weeks / months!

The idea for this project evolved indirectly from the concept of "The Return of Planet X".
A intriguing subject which I have already planned to write about detailed as soon as the release date has been set.


In the meanwhile I will focus on publication opportunities and schedule for this new release.


* X-Rated is aired each Sunday from 21:00-23:00 (CET), and can be listened to via the audio player on the Concertzender's website.
Gepost door Remy Stroomer op 15:42 Geen opmerkingen: