It has been quite a while that I wrote something on this blog. A year minus one day ago, to be exact. The main reasons might be that last two years have been quite a ride due to my last year's burnout, changing job direction after 17 years, and the way back to myself since then. The things I wanted to share with you were for the largest part related to my musical activities, and have mainly been told via social media and www.desertedislandmusic.nl, as well as my label's mailinglist.
On top, the entire covid-shizzle took over a large part of all of our lifes, which gave quite a turn to our normal habits. So strange times, to say at least.
And although things are going finally better with me since last two years, the reason for this blog is not a happy one, unfortunately.
Sylvia Sommerfeld, founder of Schallwende and initiator of the acclaimed annual Schallwelle Award as well as many German electronic music events since the late 90s, passed away on December 29th. 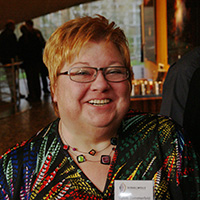 It was in 2000 at the first E-Live Festival in Veldhoven, with the release of my first official album, "The Art of Imagination", when Ron Boots introduced me to 'the most important woman of the EM-scene', Sylvia Sommerfeld. At that time, Winfried Trenkler hosted the annual Schwingungen Wahlen (which he did until 2002), where listeners of his WDR radio show could vote for the best artist, album releases and songs from the electronic music scene. At the 2001 ceremony I received my first price in the category 'Best Newcomer'. From 2009 these awards were continued by Sylvia's Schallwende e.V.. Trenkler then received a lucrative price at this first Schallwelle Award ceremony.
The various nominations I got throughout the years, have been very valuable recognitions for my musical career, as well as it stimulated many of my electronic music colleagues to continue creating, developing and sharing their electronic music.
Most of the years, these award ceremonies took place at the wonderful location of the Zeiss Planetarium in Bochum. A couple of times a year, Schallwende also organized concerts at this same place. Including the sold out duo concert I did together with Bernd Scholl (aka Moonbooter) on September 15th, 2012.
Then there were also being organized concerts at the Gasometer (Oberhausen), Live EM Brunches (Düsseldorf), and indeed the annual Grill Fest, which traditionally took place somewhere around the forelast weekend of August at a one of the 'Grill Platzes' at the Grugapark in Essen.
Besides my solo performance during the Grill Fest on August 16th, 2008, the final sessions of the day together with Ron Boots, Harald van der Heijden, Henri Peeters and René van der Wouden changed my vision on playing music together, and lead to more collaborations in the years that followed. 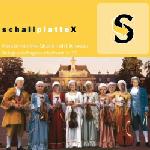 Sylvia also hosted Traumklang Radio, published the Schalldruck magazine for all members of the Schallwende e.V., and once a year musicians got the opportunity to submit an exclusive electronic music track to eventually appear on the Schallplatte CD sampler. The 2008 ("Schallplatte X - Elektronische Musik trifft Klassik") and 2013 ("Schallplatte XV - Klänge einer 'Groß'Stadt") editions also include one of my tracks, exclusively recorded for the album's specific subject. These CD's were available for all Schalldruck members.
Due to the lack of physical events during the covid period, my most recent contact with Sylvia must have been around last year's Schallwelle Awards. Sylvia really liked Däcker's "Pareidolia", which lead to the 'Discovery of 2020'.
Most recently, when Sylvia was kept in a coma, Stefan Erbe initiated to support Sylvia with personal messages. Which I indeed also did. I personalized my message with an improvised piece of music. Hopefully Sylvia got something from it in her conciousness.
I will always remember Sylvia as a friendly, compassionated, dedicated and always involved personality. It always was a good reunion when we met in person.
Will miss her e-mails regarding Sinterklaas or when there was a soccer match between 'der Mannschaft' and our 'Oranje'.
Any future electronic music concert and event will not be the same anymore without Sylvia. You will be dearly missed!
Another traditional concert series to interlude the new year, will take place tonight at the Planetarium in Bochum. The "Hello 2022" concert by Ron Boots, Harald Grosskopf and Steve Baltes will surely be dedicated to Sylvia!
My sincere condolences to Klaus-Ulrich, all family, friends, and I am wishing everyone involved a lot of love and strength.
And quoting Edgar Froese: "There is no death, there is just a change of our cosmic address".
Gepost door Remy Stroomer op 17:43 Geen opmerkingen: