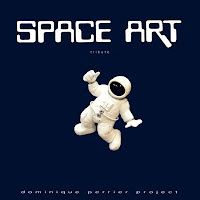 The 24th edition of The E-Live Festival was held again in Theater De Enck in Oirschot, Saturday 27th.
Besides being present again with a stall, I was also involved into the organisation of the performance of the legendary formation around Dominique Perrier: Space Art.

Their 30-minute showcase was part of the Promotional Tour 2012, for which the French musicians did gigs in the last 5 weeks in Gutersloh (Germany), Benicarlo (Spain), and Frankfurt (Germany). With a couple of new dates to follow in France.
﻿﻿﻿﻿﻿﻿﻿﻿
﻿﻿﻿﻿﻿﻿﻿﻿
Festival organiser Ron Boots gave me the honourable task to announce Space Art's showcase on stage.
Although the performance of Dominique (keys), Alain Pype (drums), Michel Valy (bass), and Lilli Lacombe (keys, violin and vocals), was modest compared with the one they did at the Electronic Circus Festival in Gutersloh, September 22nd, they again performed a great gig, which was received very well by the +/- 250 people audience.
With slight changes in the tracklist, it was also a surprise to those who witnessed show more than once. Besides introducing the vocals of Lilli (Eternally Revolving - part 3), the band even performed a completely new track, which doesn't appear on the new album.
﻿﻿

Setlist:
Stone Art
Optical Illusion
On The Web Again
Onyx
Speedway
Cosmic Chiken
Droid Obsession
Eternally Revolving - part 3
New track
﻿﻿﻿﻿﻿﻿ ﻿﻿
﻿﻿﻿﻿﻿﻿﻿﻿
﻿
E-Live 2012 again was a very succesful day, noticing a lot of people which I haven't seen here before, including quite an amount especially came to hear/see Space Art.
Due to the busy schedule of the day (for me mainly around Dominique and his band) I didn't manage to see any of the other concerts. Unfortunately, because it was a very nice edition, with a lot of variation in the programme: Glenn Main, Space Art, Gert Emmens & Ruud Heij, Bernd Kistenmacher, and AKS.
Luckily there still was enough time to talk with a lot of present people.

﻿﻿﻿
﻿﻿﻿﻿Paulien (my wife - who manned the Deserted Island Music / C.Zen Prod stall and managed the sales during the day) and I had a great time again. We ended the day with a very pleasant dinner in a nice restaurant in the centre of Oirschot, together with Dominique, Alain, Michel, and some friends, and before we drove home, we also accompanied the E-Live crew and a lot of musicians at the shoarma-bar!


When already thinking about full-length concerts by Space Art for 2013, it is first time for my own music again, starting this weekend with a recording session with the strings, for the release of my part of the Great Church performance of last May. The collaboration with Synth.nl also has to be accomplished, there has to be recorded a Christmas track for Syndae podcast (I really hate Christmas songs, but for Stefan Schulze's annual Christmas special of his show, I will make an exception... Maybe any of you have some suggestions for a track which I can do for this year's edition? Note that it definitely needs to be in minor, otherwise my suffering will be increased to a max), and I will work on some other projects in which I am involved.
Gepost door Remy Stroomer op 21:45 1 opmerking: