As you might already know, my new studio album "Fears" is going to be released on October 29th.

Last week the audio masters and the artwork have been sent to the factory, so if everything's fine the final product should be available well before the release date.
October 1st, I am present with a stall at the Electronic Circus Festival in Detmold. The artwork of "Fears" will be revealed on this day.
Again, don't forget to pre-order "Fears", which includes a limited and numbered bonus disc.

But first, there is an upcoming focus on my "Archives" series. Twice a year another episode is added to www.desertedislandmusic.nl. "Archives 4" is scheduled for October 7th, and contains recordings from the period 1999-2000.
Norbert Zumdiek pays attention to the entire series so far, during his radio show, on Friday, September 30th,  in between 20.00 - 01.00 CET.
The special covers a 7 tracks selection (a whopping 105 minutes!) from all four released episodes of "Archives". This also includes the world premiere of some of the tracks from "Archives 4", one week before the actual release date.

So be sure to tune in at Underground Äxpärten or Radio Sunrise.

Rehearsing with My Breath My Music 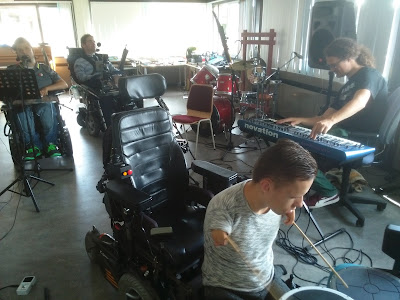 As you could have read in a previous post, I will be joining "My Breath My Music In Concert", at
Cultuurpodium Boerderij in Zoetermeer, October 9th.

Yesterday we (me with three members of My Breath My Music) did a rehearsing session for a brand new 15 minutes piece I composed for this occassion. It was good to be back at Rijndam Revalidatiecentrum in Rotterdam.

Because the largest part of the track will be filled with improvisation, we put the focus on selecting lead sounds on the Magic Flute. Sounds with which Korneel and Christian felt comfortable while playing their parts. We played through the music piece a couple of times, and set a global structure.

Glenn took care of the drums and percussion. Born without hands it is unbelievable to witness him controlling the drums.
Each time again, it is a real treat to see and hear all these musician's passion and feeling for the music.
Coming time the drum pads will be programmed with the fitting sounds. Although there still is enough room for improvisation, Glenn's output has to be more structured, because of the development of the track.

Then, I will also participate during the 'overture' on the day of the event. Together with organiser and My Breath My Music chairman Ruud van der Wel we worked out my contribution on this.

There are still tickets left, so spread the word, consider joining us, and bring all your family and friends, on October 9th!

Within the last months, REMY's physical released back catalog from 1999 to 2010 has been remastered entirely by Wouter Bessels.
This includes the limited bonus discs that had once been available with the first purchases of some of the regular albums.

From May 13th, every three weeks another album (eventually with bonus material from the same musical period) was released as digital download (320 kbps MP3 and 16 bits / 44,1 kHz FLAC). All titles contain revisited artwork.
In the meanwhile the remaster of "Exhibition of Deams revisited" (originally called "EoD") completed the series.

Here is the full list of all remastered REMY releases:

The remasters are available from www.desertedislandmusic.nl.
www.musiczeit.com will be updated early October; other download platforms will follow later.
And a reminder for what you could have read in a previous blog post: The mp3 from "This Is Not The End - bonus tracks" can still be downloaded for free.

These re-releases pave the road to REMY's first solo album in five years: "Fears". More information on this upcoming release (scheduled for October 29th) is going to be revealed within the coming days and weeks.
Pre-order now from www.desertedislandmusic.nl and receive a free limited edition bonus disc with your order.

While preparing for the release of "Fears", there are also scheduled a couple of other things:
- The release of "Archives 4" on October 7th (an update about this follows around that date);
- Another performance with Mäläskä (at the Graauwe Hengst in Schiedam, October 8th). Details follow;
- And I will be part of "My Breath My Music In Concert" (Cultuurpodium Boerderij in Zoetermeer, October 9th).
Gepost door Remy Stroomer op 15:23 Geen opmerkingen:


Mixes for my upcoming studio album "Fears" are finished! Last week I did the final touches on each of the tracks. Within the coming days all music will be listened carefully to. If there are no issues, Wouter Bessels will start the mastering. In the meanwhile I can finish the artwork and prepare the promotional stuff.

By the way: have you already pre-ordered "Fears" from www.desertedislandmusic.nl? First 50 orders will get a free strictly limited and numbered bonus disc, containing never before released music.
There are still copies left, so don't wait too long. 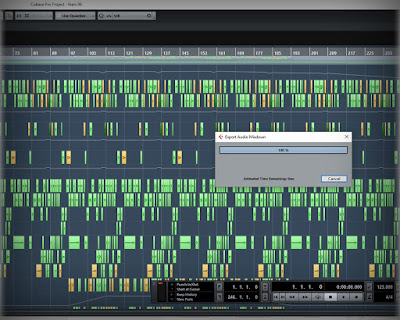 As from now, the new REMY solo album "Fears" can be pre-ordered from www.desertedislandmusic.nl.

This pre-order offers you to get the album at latest 1 day before the official release date of October 29th. But, there also is something exclusive for the first people who buy the album.

Everyone who orders the cd, gets a strictly limited and individually numbered cd-r (only 50 copies available), which will be included for free with your order.
Everyone who orders the download (MP3 or FLAC), receives the cd-r's exclusive content in the same format as you have ordered the album. However, the download version is not individually numbered.
This bonus material consists of never before released music.

Pre-ordering is available until October 28th, 2016, or until stock lasts. So don't wait too long ordering your copy!
Eventually remaining physical copies after the pre-order period will be available for the first customers.

And yes, currently there are no direct sound clips, and no artwork. But, I hope you have a little more patience. Things will be revealed within the coming days and weeks. So stay tuned!
Gepost door Remy Stroomer op 17:56 Geen opmerkingen: