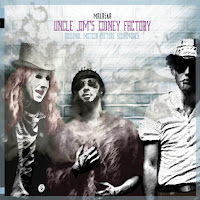 Last week Petter Janse and I did a couple of concerts with our improvised space electronica project Mäläskä.
The idea was to create something unique and spontaneuous live on stage, in the same way the material for our debut album, "Uncle Jim's Cidney Factory", was recorded in my studio.
We got the opportunity to do a couple of concerts at the time of the release. Based on completely improvised sessions, which should make every session and performance a totally unique and exciting experience. And performing this project in front of people makes it even more exciting. At least in our opinion.


Here is an overview of our mini-tour:

June 29th - Pletterij Debat- en Cultuurcentrum, Haarlem
Wednesday afternoon, around 15:45 we arrived at the Pletterij. A familiar place, because Petter and I (together with Jeroen Hagen) already performed here back in 2014 with a Free Arts Lab try-out. And I participated on an edition of the Pletterij Impro Sessions, earlier that same year.


It is always a big treat to be at one of the most intimate and nicest venues in the centre of Haarlem. We got all the time to set up our equipment, and sound enigneer Rob and his assistant again did a great job to take care of the sound technical part.
Everything seemed to go flawless, while dinner was being prepared. We were actually ready for the soundcheck. Then, a significant power supply broke down, only 1,5 hours before the beginning of our concert.
First there was tried to solder the broken part, but the best option seemed to get a replacement at my home in IJmuiden. I had another similar power supply, but at that moment I wasn't sure about the technical specifications of it.
We departed from Haarlem around 18:30. A wonderful time for the evening's traffic jam. So it took us a while to get where we wanted. After picking up the power supply, we went straight back to Haarlem. Where we arrived one hour later.
Luckily the power supply was exactly the same as the one that was broken. Finally, we got everything working, and did a sound check.

Although 20:00 was scheduled as the start of our concert, at the door the time was mentioned half an hour later. So we entered the stage slightly past 20:30.
I did a short introduction talk, after which Petter set in the first sounds, and there we started.

The first part of this evening last 53 minutes. Afterwards I noticed this set might have a couple of comparisons with what we created on our just released album.
Without the intention to recreate anything from our album, this first hour might incidentally have been most representive for what we were actually promoting.

A break followed. Hereafter we continued with quite a different 58 minutes set. We experienced some very exciting moments, and enjoyed ourselves a lot. Musically seen we were very satisfied. And also the audience seemed to like it a lot.
We finished around 23:00. Hereafter the food we missed due to the power supply issue was warmed, again. Delicious.

Thanks a lot to all visitors, Arno Duivestein for the organisation and the delicious food, Rob Brakel for the sound, light and technical support, all volunteers at the Pletterij, Paulien Bouw for assistance and support, and Ab Laanbroek for photographing.


July 1st - Muziekcafé De Hommel, Vlaardingen
Our concert in Vlaardingen was perhaps the one which I was most excited for.
Muziekcafé De Hommel is a location where anyone could just walk inside - even people who didn't come to listen to (our kind of) music - so we didn't have any idea what to expect at all.

We arrived around 20:00 and started to install all equipment in the back of the Music Café. In between this, we had some nice chats with the people who were already hanging around.
This time no technical issues during the setup and performances. Only 'issue' was a snare drum resonating during our first part of the evening. For the second part this background noise was removed.
The first people at the bar specially came to see us perform. Later on we also traced quite some unfamiliar faces.

22:30 the musical part of the evening started. The following 70 minutes we created a piece of music, which felt good to us. Hereafter we took the time to relax a bit and have drink and a chat.
A couple of people already start to leave the Café because they had to get their train. Unintentionally there was decided to do a second set. Luckily we did, because this might have been the best thing we did so far. This part last some 50 minutes. When overlooking all concerts from this mini-tour, this definitely must have been our musical highlight. Probably caused by the relaxing atmosphere and the fact we were expecting not too much from it.

As soon as the last note was struck (at approximately 1:45 a.m.) we where overwhelmed by the extremely positive response by all audience. Including the people who 'just' visited De Hommel this evening / night.
A couple of minutes later, Petter and I were interviewed by Iris Hidding for Grendel HQ. Information about the broadcast will follow soon.
Iris also reviewed the concert, and filmed the first performance.

It was about time to break down our setup, and head back home.
It would be a very short night, because within a couple of hours we already had to travel to Germany for the next gig. I got back home somewhere near 5 a.m., and got some sleep.


Thanks a lot to all visitors, Ben Visser for offering the opportunity to perform at his Muziekcafé De Hommel, and Iris Hidding for assistance. 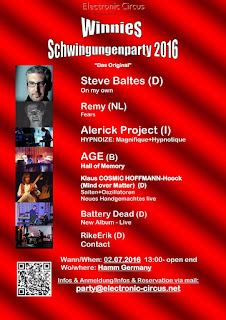 July 2nd - Schwingungen Garten Party, Hamm, Germany
After barely 2,5 hours of sleep, I had to wake up to head to Germany.
We appointed around 10:00 somewhere halfway The Netherlands to get the remaining equipment into one car. Otherwise we would have travelled with three cars. Which wouldn't have been very practical.
From that point it was 2 hours driving to be in time at the Garten Party.
Then we got a two hours delay, because of an issue with a key which was left in a closed car.
After the incident we (Paulien, Petter, Michel and I) travelled directly to Hamm. As soon as we arrived at Winnie's, we carried all equipment into the garage.

As soon as we refreshed ourselves at our hotel, we headed back to the Garten Party to enjoy the music, the great atmosphere, nice chats, and delicious food. We were definitely having a great time.

Although I didn't actively attend the concerts during the day, I heard some nice music from the place in the back of the garden, where we sat for a large part of the time.

Different from what was announced on the concert poster, we were scheduled as the last act of the evening.
During Steve Baltes' very nice gig (which was before ours), I decided to not kick off our performance with the planned track from my upcoming solo album "Fears". Simply because I felt this should be something else at that moment.

As soon as we started to install all our equipment on stage, it became clear that the time to do so was very limited. At that time we were already behind 3 hours on schedule. We were planned for 23:45, but our part of the programme started around 2:30.

One of the organisers, Frank Gerber, announced "Mäläskä". Petter set in the first sequence. Thomas Betzler, who was joining us especially for this ocassion, added the necessary percussion. While largest part of the day the sun had shone, it started to rain heavily slightly before we were about to start. The first 15 minutes I was absolutely unable to hear what was going on, so I decided to interrupt the thing we did at that moment. It was needed to take some time to adjust the sound to be heard on stage. Until that moment, I was totally unable to get the right focus.
The next 50 minutes we created things I wasn't aware of for a large part of the time.
Petter described it perfectly afterwards as "This is not music, this is a state of mind!" And I agree with him 100%.
Nearing the end of our gig, Petter decided to take a step back to enable me to create something that had to be created.
This lead to an intense piano solo piece, straight reflecting my feelings at that moment, joined by Thomas Betzler on percussion, who made the right additions at the right moments. Hereafter, to answer the audience's request for an encore, I did another solo improvisation.

The next morning we had breakfast at 11:00, after which we headed back to the Netherlands.


A remarkable conclusion of this last performance of our mini tour I realized two days after the Party.
Actually when fellow-musician René van der Wouden posted the video from our entire concert on YouTube.
On the moment itself, the over-all feeling I had about the musical output, was not really positive. Until I saw that specific video. With some exceptions, there are some really surprising things to be heard. Anyone could have noticed some 'lack' of communication between Petter, Thomas and me. Especially within the first part. This can be explained by the technical issues, combined with the midnight time, and the lack of sleep we had the nights before.
However, in the end I think our appearance wasn't that bad at all. Although we didn't realize so at the moment of the performance. This might also explain the positive responses we got right after our performance. Actually pretty interesting.

Thanks a lot to all visitors (especially everyone who remained until the late hours to see and support us), Winfried Wiesrecker, Frank Gerber, Hans-Hermann Hess and the Electronic Circus crew for the organisation, Lutz Hilker for the sound, Thomas Betzler for getting involved into Mäläskä's musical journey, Paulien Bouw and Anke Betzler for assistance and support. And, last but not least, René van der Wouden for the realistic insight into our concert's output.


Three concerts in four days was very intensive and cost a lot of energy, but above all, it was a lot of fun, a real pleasure and wonderful experience. It always is a privilege to get the opportunity to create music together with people who are on a same musical level. Like in the first place Petter, but also Thomas. Until now Mäläskä has been an exciting journey full of surprises. And I am convinced there are a lot more surprises ahead. To be honest: I need more of it!

We are looking forward to your reactions, photos, videos and recordings. Please forward them to info@desertedislandmusic.nl.
And, stay in touch with Mäläskä's Facebook page for any updates.
Gepost door Remy Stroomer op 20:28 Geen opmerkingen: