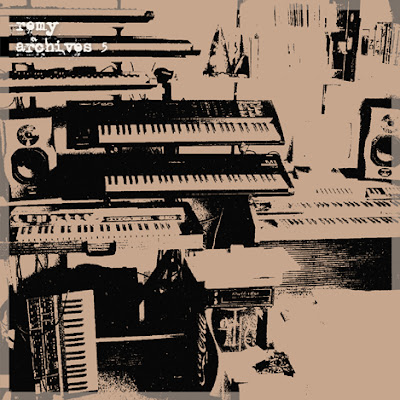 The fifth release of my archives recordings is available. This edition might be the most experimental Archives so far, containing five improvisations.

Here are the details:
Since the early 90s, Remy registered an uncountable amount of compositions, improvisations, try-outs, sketches, studies and performances.
Remy always felt the need to release a lot of this material, but with such a huge variety of recordings, it was never possible to release everthing.
During the selection process for the released REMY-albums, a lot of music was rejected. Simply because these tracks didn't fit into the concept or feeling of the specific release.
A large amount of unfinished tracks, sketches, etc. will definitely never be released. And there also is enough stuff that is absolutely not good enough by means of technique and recording.
But through “Archives” there is this possibility to publish and share a lot of these recordings. Recordings that otherwise would never have seen the light.
Besides the fact that “Archives” offers music that could never be heard before, it gives the perfect insight into Remy's musical and artistic world, as well as it might also help to understand the direction Remy's music evolved into.
“Archives 5” contains material from 2002.

"Archives 5" consists of mastered archives recordings and is available as 320 kbps MP3 and 16 bit / 44,1 kHz FLAC. The accompanied artwork contains the necessary background information on each of the tracks, as well as some photos from the period of the specific music pieces.

It's only two weeks to go until the E-Day Festival in Oirschot!
There will be a great line-up containing a wide variety of electronic music acts, including Moonbooter, Arcane, Pyramaxx and Space Art.

After five years, legendary French synthesizer formation Space Art returns to Theater De Enck in Oirschot.
Where the band first entered this stage in 2012 as part of their promotional tour, it's now time for a full headlining concert.
This year, Space Art celebrates the 40th anniversary of their first record from 1977. While we speak, there is being worked on a new album, and the band prepares for a world tour.

And I am extremely honoured since Dominique also asked me to be part of Space Art too.

End December 2016, I visited Dominique, and we talked about Space Art concerts for 2017. Of which the first is going to take place during the E-Day Festival on April 29th. Last week we have been rehearsing for this upcoming electronic music event.


It's a real pleasure to make music together with such a talented group of musicians. Looking forward so much to perform this project on stage!

If you haven't obtained your ticket yet for the E-Day Festival, don't wait too long buying your ticket, and support the festival and performing artists.
Tickets and details: www.e-live.nl
Gepost door Remy Stroomer op 12:06 Geen opmerkingen: