Saturday evening it was showtime for a very special project Ron Boots and I have been working on for quite a while.
I performed three times earlier at the great location of the Grote of St.Bavokerk / Great Church of Haarlem, which I concluded with a cd release of this trilogy, last year. In the meanwhile Ron and I discussed the possibilities to organise a music only evening at this same location. Ron playing his music, me playing my music, and concluding the show with a collaboration. No idea about the exact content yet...

As soon as the date of May 19th was set, things became more and more concrete, and I decided to perform again with strings. In 2008 two cello players were part of my performance, and this time I chose to include two violins and one cello into the line-up. Ron had plans to involve a ten-piece choir, which was confirmed in a rather late stage of the project's preparations.
Ron didn't feel much for the inclusion of the Müller organ into the concert evening in first instance, but I thought that it should be an absolutely needed addition to the show. I discussed the use of it with Eric van der Heijden, and finally we decided that we should do our very best to collect the neccesary amount of money to realise this.
About only two weeks before the concert the line-up was finally completed, with the addition of the ten-piece choir and the worldfamous Müller organ.

Around 4 PM the installation of the equipment in front of the huge Müller organ was started. 7 PM everything should have been ready, to have another 45 minutes to 'relax' before my part of the evening should start. Due to a couple of technical issues, we started a couple of minutes later.

Then slightly before 8 PM, the strings trio started to play their first notes, which marked the beginning of my set, and so the start of the evening! My setup consisted of: Access Virus TI, Korg M1, MemoryMoog, Novation Supernova 2, Roland D70, Roland JV880, and I made use of a grand piano! As far as I could judge from the sound from my position and my own experience during my performance, things went fine for the largest part. From time to time I've had contact with the strings trio, which seemed to control their parts, and which gave me the opportunity to let me do my own thing. Halfway my set, I noticed the stability (all 6 voices tuned!) of my MemoryMoog (which I didn't expect at all), which gave me the opportunity to use it more than planned.
I had two options in mind to end my musical piece: concluding with a solo on the grand piano, or leaving the end as it was, with the ending of the sequencer track. After all, I decided to replace these two options by a MemoryMoog ending! My first job was done.

Time to relax a bit while the first break took place and - again some later than expected - Ron Boots kicked off his concert with some late 70's Klaus Schulze inspired music. Starting with a whispering choir, continued by soft synth pads, and later on the introduction of strong sequencer lines. Besides playing his synths, Eric van der Heijden also conducted the choir, and Harold van der Heijden gave Ron's set a boost with his electronic drums. Great stuff, which worked out very well in the ambience of the church.
In the meanwhile the evening outside caused the neccessary darkness inside the church, and the present lightshow and smoking machine reached their maximum effect.

Because the programme delayed about half an hour, and taking knowledge of the fact that we absolutely should have finished the concert at 11 PM, there was decided to continue the third part of the show without the planned second break. In the end this maybe was too intensive, but this decision was taken to get the maximum out of this evening!

Starting the completely improvised part with a quatre mains piece by Ron and me on the grand piano. Followed by an ambient piece, continued by some sequencing. After this Eric performed one of his pieces, and then it was time for the grand finale. Ron and Eric started to build some layered pads combined with V-Synth vocals, while I made my way up to the Müller organ. Although Anton Pauw (the Church's organist) taught me the basics in short, it was kind of guessing what was going to happen when pulling certain registers of this amazing instrument. In the end everything worked out in a more or less very natural way, and all elements of the evening seem to come together perfectly in the end.

In my opinion it was an evening which was above our (the organisation) expectations. Besides this the audience was very enthusiastic too (including a lot who weren't familiar at all with the kind of music that was being exposed last Saturday)!
An surprising amount (200+) international audience (from the Netherlands, Germany, Belgium and even U.K.), a great atmosphere and no mentionable problems, made it a memorable evening.

The coming time I will listen and watch to all recordings that have been made.
After this we will see what's possible for an eventual release, and maybe more interesting... a sequel of Saturday evening... Time will tell... 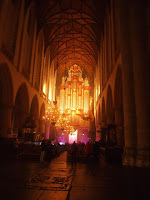 At last I would like to thank all who participated and made this very special evening possible! No names, because there are too much, but resumed: Crew, musicians, church crew, catering, press, media, and of course: the audience!