Tonight one of my past performances is going to be premiered in its entire on Waveman's Underground live broadcast. It includes music I have never released until date, and parts were composed and performed exclusively for the concert's occassion.

Radio host John Valk has been supported my music for quite some years now, and more than once I promised him to send him the recordings from the duo concert I did with Premonition Factory (aka Sjaak Overgaauw) at the Vishal in Haarlem, on December 14th, 2012. Now, finally, 7 Years and 13 days later, John has the opportunity to air these 45 minutes of unreleased music.

More about the Vishal concert:
https://exhibitionofdreams.blogspot.com/2012/12/live-ambient-at-vishal.html 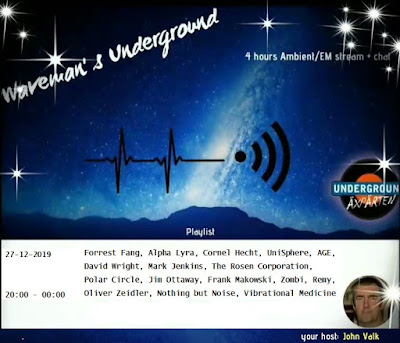