Last week we experienced some really great vibes during our Mäläskä concerts.
The inspiring artistic collaboration of some lovely fellow-musicians resulted into an exciting output which we could never have predicted. And that is exactly what I like so much about Mäläskä!
Both evenings were a real blast sharing our musical journey with a lot of you. And it felt good to receive so much positive response.

Monday we kicked off with our full show at the Pletterij. In first instance intended as try-out for our performance at the Patronaat the day after, but as we had the whole evening, we also planned to do a full session for a second part.
The try-out part was Mäläskä featuring Tristan 'Lama Waaien' on bass guitar. This also was the line-up we intended for the Patronaat.

Tuesday we entered the stage at the Patronaat. Performing half an hour as support for the main act, Acid Mothers Temple.
The approach was slightly different, as we now really had to stop playing at the 30 minutes mark, instead of playing and seeing where it should end. Besides, we wanted to anticipate musically on the main act. Which was another challenge.
After the fruitful collaboration at the Pletterij, we decided to also invite Joost Verhagen for this gig.
For both evenings Petter prepared some different loops. None of the musicians heard these loops in advance, so we had to fully rely on the moment.
And to be honest, I think it worked out quite well on both evenings. 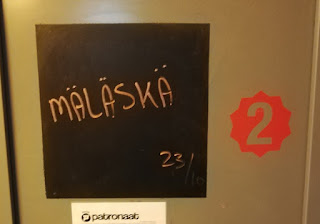 This Patronaat gig was also filmed. The material is being edited right now, so this will soon be shared with you too!

Many thanks to everyone at the Pletterij and Patronaat, crew, musicians, Acid Mothers Temple, and indeed everyone who attended the concerts and was part of the experience.

Coming time we are planning to bring more Mäläskä to you. So stay tuned!
If you have suggestions for us to perform, don't hesitate to share it with us.
Gepost door Remy Stroomer op 18:45 Geen opmerkingen:

I am excited to announce some upcoming Mäläskä concerts.

Although we seem to have not been very active recently, Petter and I haven't done nothing in the last months.
A little while ago we did a private gig in Rotterdam, and most of the times we did sessions together in my studio.
Many, many hours of material has been recorded, so it is be likely that we will do something with parts of it in near future.

For upcoming concerts we invited some friends / fellow musicians. Both gigs will be completely different from each other, so if you consider to come to see us, please think twice before making your decision which one you will attend. Or maybe combine both!

The performance we are 'working towards to' is the one at the Patronaat in Haarlem, Tuesday October 23rd.
We will be playing as support act for Japanese space-gaze band Acid Mothers Temple.
For this opportunity we invited Tristan, aka Lama Waaien.
Tristan and I already played together a couple of years ago during one of the first editions of "Pletterij Impro Sessies".
Petter and I wanted to add some more low (by means of frequencies) to our music.
So, when thinking about an improvising bass player, I instantly came up with Tristan.

When we talked about a try-out for this show, we were warmly welcomed by Arno to perform at the Pletterij again.
Mäläskä also performed here with the "Uncle Jim's Cidney Factory" album presentation, back in 2016.
Because we will do a full show at the Pletterij on Monday October 22nd, we decided to do this as following:
Petter, Tristan and I will kick off with a try-out for the Patronaat gig. This first part is aimed to take approximately 30-40 minutes.
Then, after a break and some stage adjustments, we will come back with a second part.
Also inviting Bas Broekhuis (Broekhuis, Keller & Schönwälder) on percussion and vocalist Joost Verhagen (Grey Lotus) on stage.
We have never rehearsed or played together with this line-up, so on the day of the concert we are trying to find out if this is going to work. Really exciting.
In the case things work out positively, it might theoretically affect the Patronaat's line-up.


For information, tickets and reservations, please visit the links below: